A 17th-century townhouse in the Netherlands | Unknown Architects

A 17th century townhouse in the historic center of Leiden, the Netherlands, was renovated to provide a “pied-à-terre” for a couple who spend much of their time traveling. Dutch studio Unknown Architects began the project by gutting the small house, removing all the interior walls. Their new design uses built-in furniture in place of partition walls to give the house a much more open and functional layout. The non-original ceiling finishes were also pulled down to reveal the original beams, marked by centuries of wear. The beams were left as they were found to contrast with the refined look of the new built-in furniture elements. A minimal winding staircase with open risers links the three floors of the 75 m2 (807 ft2) house. 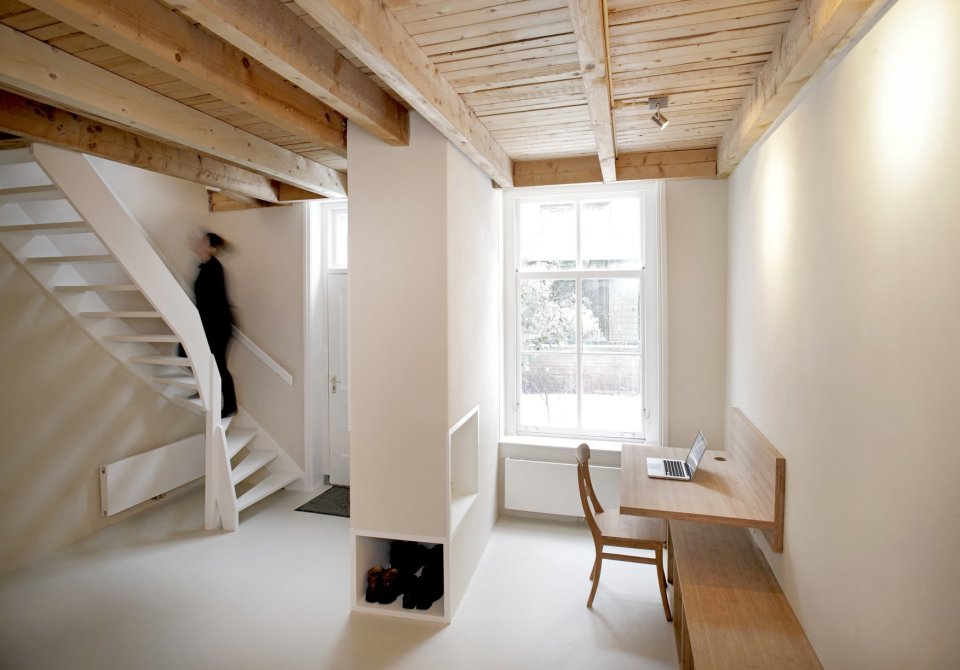 The ground floor is a multiuse space that can function as home office, living space or guest bedroom. A storage unit was built to separate the entrance from the office area at the front. The bathroom is in one back corner and on the other side the architects designed a raised sitting area with a pull-out guest bed concealed below.

As the owners wanted the kitchen to be the main social space, the architects placed it on the middle floor, making it the heart of the house. The middle floor was also the brightest, with large windows front and back providing lots of natural light. New walnut kitchen cabinets line one wall. About half the remaining floor space has been used for a furniture unit consisting of extra kitchen storage with an attached dining table and a built-in bench that doubles as a guard for the stairwell. The bench apparently provides the best views to the outside, but as you can only slide into it from one end, it may not get as much use as it would otherwise. The bedroom is up one more level, tucked into the attic space.

Photographs by Raoul Kramer, courtesy of Unknown Architects. Via Dezeen.