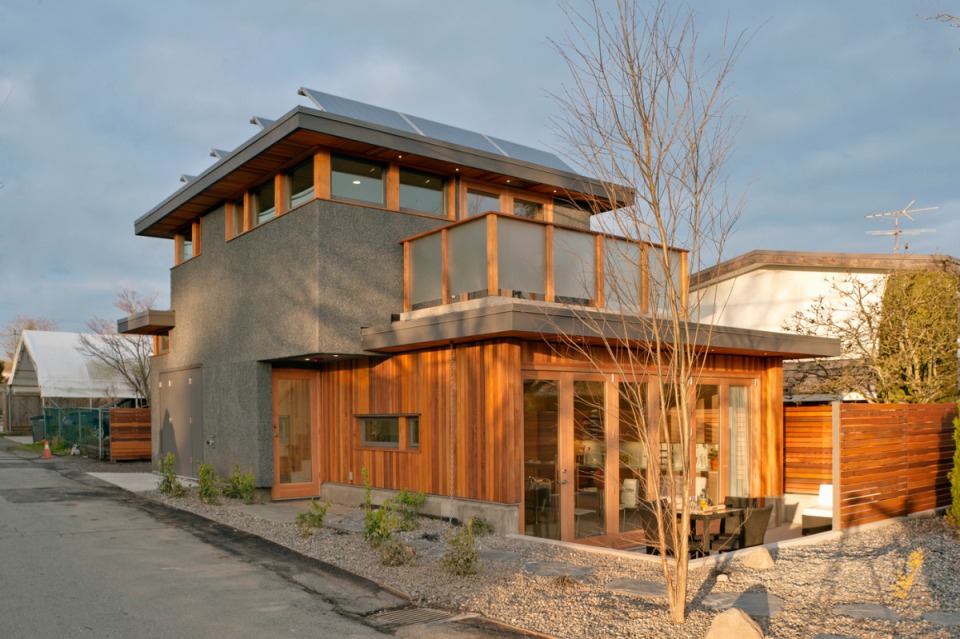 Lanefab Design/Build recently completed this energy-efficient laneway house with Mid-Century Modern styling. “Laneway house” is the term used in Vancouver, British Columbia for a second small house built in the backyard of an existing house, what would be called an accessory dwelling unit in many cities. Vancouver allows laneway houses to be built on residential lots at least 10 m wide where the back of the lot is serviced by an alley. Most residential lots in Vancouver meet those criteria.

The house is 70 m2 (753 ft2), the maximum allowed under Vancouver’s regulations governing laneway houses. Not included in that figure is the garage, which is fully insulated and finished. The upper floor is stepped back from the sides of the house as the regulations limit it to 60% of the ground floor area. The 60% rule is intended to reduce the visual bulk of laneway houses and minimize the effect of shadowing on the neighboring properties.

The main floor living area is one large open room with the kitchen along one wall. The south wall consists of a mostly glass folding door system that opens the whole space up to the adjacent patio. Upstairs is the bedroom, a good-sized bathroom, and the laundry. Windows high in the wall provide light and a view of the sky while maintaining privacy. The bedroom also has south-facing glass doors leading to a small rooftop deck. 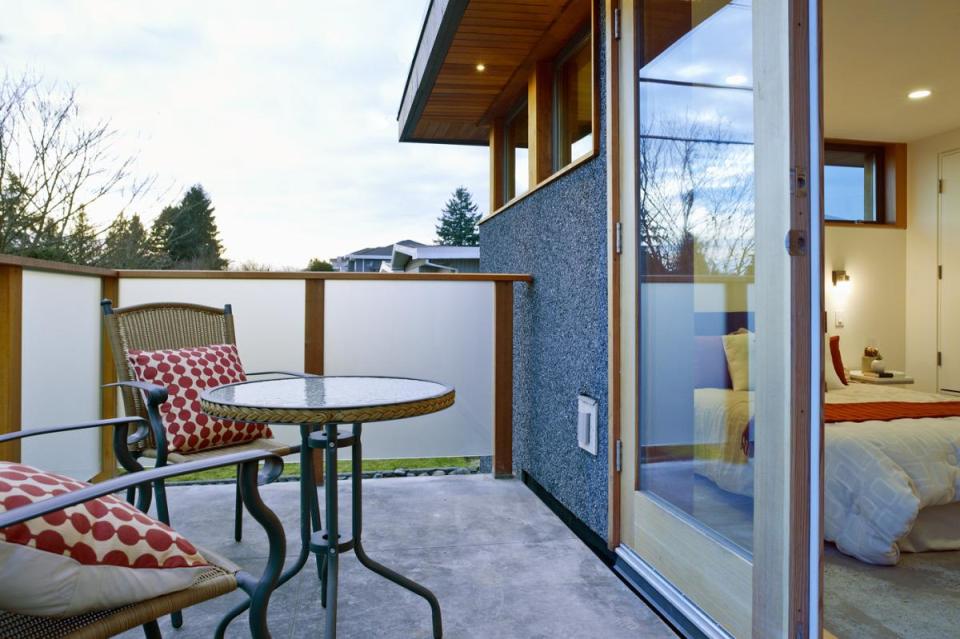 There is a second bathroom on the lower level, complete with shower, but it is unusual in that it is accessed from the garage. Remember though that the garage is insulated and finished. As the owners of the property intended to move into the laneway house themselves, they likely had a specific reason for the unorthodox bathroom configuration. It might be, for example, that they plan to use the garage as some kind of workshop and want to be able to clean up before entering the main living area. If you are planning to live in your house for a long time, it makes sense to design it for your own specific needs rather than following convention. For a more traditional powder room, you could eliminate the shower and move the door to that end, which would provide plenty of privacy for guests.

The house is very well insulated and has triple-glazed windows. It was constructed from structural insulated panels that were prefabricated off-site. The south-facing glass doors provide for substantial passive solar heat gain, which is absorbed by the concrete floors on both levels. The combination of very high insulation levels and passive solar heating resulted in a house that requires very little energy to operate. With the addition of rooftop photovoltaic panels for generating electricity, the house is able to generate as much energy over the course of a year as it uses, making it a “net-zero” or “zero-energy building“. Other green features include LED lighting, heat recovery from both ventilation air and waste water, and a rainwater collection system for irrigation.

If you enjoyed this article, have a look at some of the other accessory dwelling units we’ve covered. 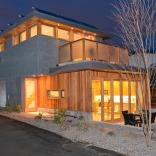