Sønderho is a charming little village on the island of Fanø, off Denmark’s southwestern coast. The village is home to around 300 well-preserved buildings, some dating back to the 17th century and many from the 19th century. This cottage is a relatively new one, with the older part having been built in 1925.

Eighty years later, the original 16 m2 (170 ft2) tiny house was renovated and expanded to a still compact 39 m2 (420 ft2) footprint. Sønderho is quite protective of its cultural heritage, so its no surprise that the cottage’s additions are very well integrated, making it difficult to tell the new parts from the old.

The cottage has a long, thin floor plan with a narrow end facing the street. The “front” door is actually on the side of the house. Placed near the middle of the expanded floor plan, it creates an efficient layout for circulation. The door opens to a short hallway that doubles as the entry. The hallway connects the living space on the left, a bedroom on the right, and the bathroom straight ahead. The entry hall is also the location of a ladder that goes up to the attic bedroom space, which has been set up with four beds.

A small woodstove in the main living space separates the sitting and dining areas. The sitting area is also defined by a vaulted ceiling, whereas the loft bedroom extends over the dining area. The original cottage wasn’t even 8′ wide on the inside, but a bumpout added a couple extra feet to the kitchen and dining areas. 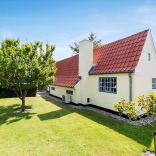 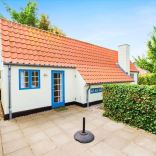 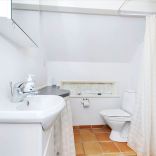 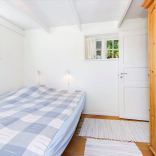 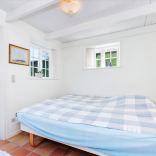 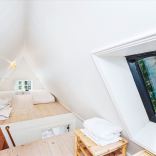 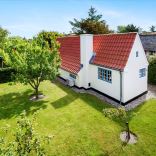