Vacation cottages in natural settings are found all over but seem to be especially popular in Scandinavia, maybe because Scandinavians want to maximize their enjoyment of the short summers. This one is surrounded by forest on Tegelön, a small island in the Stockholm archipelago. It is conveniently close to Stockholm yet feels worlds away.

The cottage was built in 1944 and consisted of the living/dining room plus the kitchen and bedroom at one end, with the fireplace located near the center for heat distribution. The two bedrooms and sleeping loft at the other end were a later addition, bringing the floor space to 65 m2 (700 ft2). The living and dining room likely had a lower ceiling originally but it has since been opened up, putting the roof trusses on display. The cottage now has a connection to the grid, so electric radiators provide another option for heat. 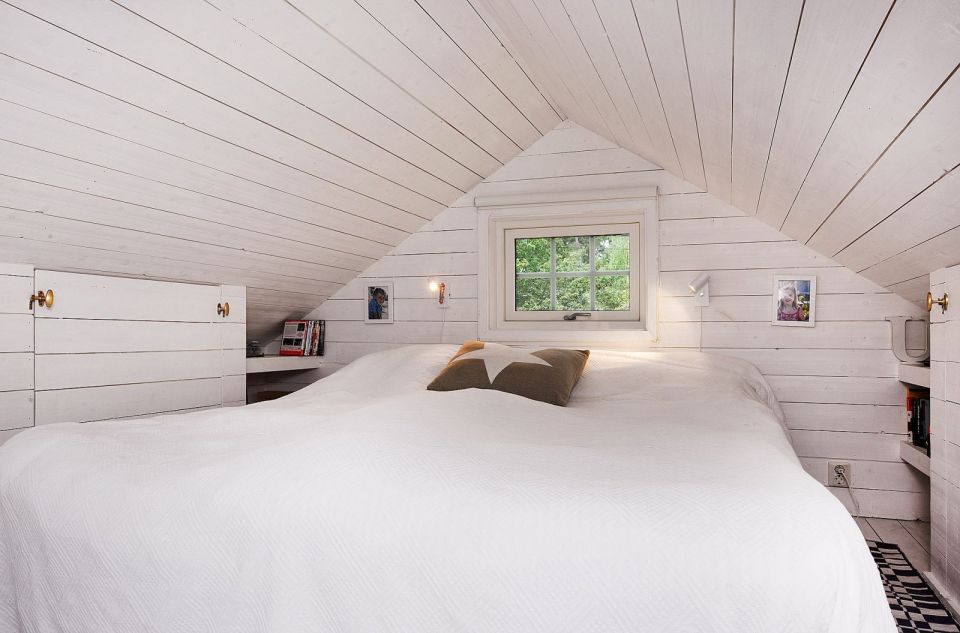 The property also has a 18 m2 (194 ft2) outbuilding containing a sauna and guest quarters. The only bathroom facilities, with a shower and composting toilet, are in the guesthouse. For some reason, while the kitchen was modernized, no bathroom was ever installed in the main cottage. However since there is running water in the updated kitchen, it would be relatively straightforward to turn the adjacent small bedroom into a bathroom, still leaving plenty of sleeping space.

← Solar Decathlon 2015: INhouse
Cozy cottage in the woods near Asheville →

One thought on “Forest cottage in Sweden”